This is the first part of a two-part series about Testcontainers. In this first part I will explain what it is, what problems it tries to solve, how it works and finally how you can use it in your own projects. In the second part we will see if we can reduce startup time for our Testcontainers.

Earlier this spring I held a skills meeting for my colleagues that was about JUnit 5 and Testcontainers. I should have written a blog post about it but for various reasons it was not done, but now it’s finally time and it is about Testcontainers. This will be a trilogy in two parts, Getting started with Testcontainers and Speed up your Testcontainers tests.

The full source code for my example project can be found here: https://github.com/merikan/testcontainers-demo) and it has two directories named origin and solution.

So let’s start with the obvious question; what is Testcontainers and what are the problems it is trying to solve? Or is it just another cool tool in our development stack?

On Testcontainers’s home page you can read the following;

Testcontainers is a Java library that supports JUnit tests, providing lightweight, throwaway instances of common databases, Selenium web browsers, or anything else that can run in a Docker container.

How cool isn’t that? This means that if the software can run inside a docker container we can use it in our tests.

A personal note; After using Testcontainers a couple of years, for both my Java and Go projects, I do think they should restructure the Testcontainers main site and embrace the other projects and let them become first class citizens. Projects not ready for prime time could be incubators.

What problem does Testcontainers solve

So back to the question that we should ask; What are the problems that Testcontainers could help us solve?

If we first take a look at different test strategies and different layers, usually explained as a test-pyramide, that Mike Cohn described in his book Succeeding with Agile. 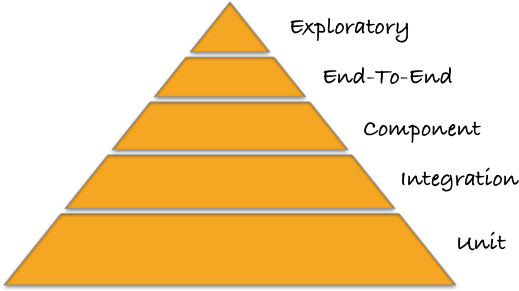 At the bottom we have unit tests. Must of us can agree on what a unit test is in a TDD development workflow. A unit test is “a way of testing a unit, the smallest piece of code that can be logically isolated in a system”. It focuses on a single component and replaces all dependencies this component interacts with. In Java this is usually a Class and all collaborators are replaced with Test Doubles with the help of libaries like Mockito and EasyMock.

If we look above the Unit test layer in the test-pyramid we will find some type of integration test which means that we will have more than one component and sometimes we need to integrate with an external resource, a.k.a backing service. A backing service is any service that our application or module consumes over the network and it is now Testcontainers shines. Before we look at Testcontainers, let’s first discuss some of the problems we’ve had with external resources.

Over the years we have tried to solve the problem of interacting with external resources in different ways, depending on the type of backing service. To make these resources available it’s a balance between cost (license, hardware, etc.) and the degree of automation and ease of setting them up and maintaining them. Then several issues arise such as; should we use a shared resource on a remote server, or a locally installed process or a embedded in-memory service? Each solution to our first problem has its own problems and challenges, below you can see some of these challenges.

A shared resource on a remote server;

Each strategy has it’s own pros and cons and today, embedded resource is probably the most widely used method. It solves many of the previous problems but unfortunately it introduces some new. Some problems that I have encountered from time to time are: It only emulates the target resource (e.g. H2 emulating MariaDb or Flabdoodle emulating MongoDb), usually with subtle differences, and the security settings are typically different from the target environment. We will of course find these differences in the end, but the earlier in the development process the better.

Testcontainers to the rescue

One great solution to many of these problems is Testcontainers. With Testcontainers we can start and stop one or more docker containers with the same resource as we use in our production environment, with a configuration as similar as possible. Later on I will show how easy it is to use Testcontainers in a Spring Boot application with Junit 5, but it can of course be used in any Java application.

Not everyone agrees that you should start up resources locally, but it usually depends on what conditions you have in your project. If your system landscape is based on microservice architecture and perhaps consists of hundreds of microservices where some are needed as a backing service, it is probably not conceivable to try to start these locally. However, most of us are not in that situation with so many microservices that form a system landscape, so for us Testcontainers probably works very well. If you are more interested in this topic, Cindy Sridharan has written several great blog posts on the topic (see e.g. Testing Microservices, the sane way), and some slightly more controversial blog posts about testing in production, which I really appreciate and find interesting.

Now we now that Testcontainers is a open source project that we can use in our tests to start and stop anything that can run in a docker container. Let’s delve deeper into the subject.

Testontainers can be of two types: GenericContainer and Specialized Containers a.k.a Modules. GenericContainer is used as basis to create your own Testcontainer of any docker container. A module is a specialized container that is designed for a specific product such as MariaDb, Kafka etc. and we can see them as specialized Testcontainers with extended convenience methods and functionality. One module that differs from the others is DockerCompose, which allows you to start several containers at the same time and of the type you want.

How does it work

All we need to do in our tests is to declare that we want to use one or more Testcontainers, of a certain type. The Testcontainers framework will download the image (if it doesn’t already exist locally) and handle its lifecycle during the tests by starting the container, make sure it is ready and then stop the container after all tests have finished. This is done by annotating the test class with @Testcontainers.

The next step is to add the @Container annotation to specify which Testcontainer we want to use and to be started by the Testcontainer framework. We have two options here; containers declared as static fields will be shared between test methods and containers declared as instance fields will be started and stopped for every test method. Which strategy you want to use depends on how independent your tests are, you must handle any side effects that are caused between the tests.

To make sure we have reproducible builds we should never rely on latest, instead we should always declare what version we want to use, such in the example below:

This is one way to start Testcontainers but later on I will show you another and, in my opinion, better way to start them.

Our containers are started with dynamic port numbers and some other default values. You can of course set these and other values yourself when you start a Testcontainer. You can then easily retrieve information about the started container through various methods such as:

Earlier I said that there was a better way to start our Testcontainers instead of using the @Container annotation.

Keep in mind that you have to deal with any side effects caused by multiple tests using the same resource. For example, by making your tests unaffected by the state of the resource or by setting the resource in the desired state for each test.

This is what the abstract class looks like to be used to start Testcontainers:

Each integration test class should then inherit from this abstract class to make use of Testcontainers.

If we now run our tests, we can see that our Testcontainers are only started once, which most likely means that we have shortened the time to run our test suites significantly.

In the following example I will be using Spring Boot, Junit 5 and Maven. You can find the source code on Github (https://github.com/merikan/testcontainers-demo). It contains two directories, origin and solution which represents before and after our changes.

The first thing we need to do is to turn off any embedded resource started by Spring Boot and instead use Testcontainers.

Remove h2 as an embedded resource so that Spring Boot does not attempt to start it.

Note: We are using version 1.15.0-rc2 of Testcontainers due to issues with Docker for Mac 2.4.0.0 in earlier versions.

Next we will create an abstract class to be used by all integration test classes.

Now it is time to make sure our integration test classes inherits from AbstractIntegrationTest.

This is all we have to do to get started with Testcontainers in our Spring Boot projects. As you can see it’s pretty straightforward and very easy to do. If you want to run the tests yourself you can do the following, assuming you have Git and Java already installed.

If, after running your tests, you are fast and run the docker ps command you can see that your containers might still be running together with the Ryuk container but after a short while they are all stopped.

This is not a Testcontainer problem but rather a side effect of the changes we did. Since we removed the support for embedded H2 database, which was used when we also ran the application locally with Maven, we now want to use a MariaDb instead and start it as a docker container. I have added a docker-compose.yml file we can use to start MariaDb locally. When we then start our application with the spring-boot-maven-plugin, the spring profile named development will be activated, see property file application-development.yml.

If your start a new terminal while the application is running you can curl to the endpoint like this.

In this blog post, I have explained what the Testcontainers framework is and what problems it tries to solve. I have also briefly explained how it works and how you can easily get started using it in your own projects.

In my next blog post, I will show a little more advanced usage of Testcontainers to, among other things, speed up your tests.

And finally;
I’m just a human being, if you find any ambiguities, typos, errors or possible improvement, please let me know.
If you like this blog post, please add a comment and feel free to share this blog post using your favorite social media platform! There should be a few icons below to get you started.