In this blog post we’ll use Golang, YAML and Highcharts to create a load-test tool capable of simulating thousands of concurrent users borrowing many concepts from Gatling. It can also be read as an introduction to some core Golang features. With a huge pun intended, I’m calling this tool “Gotling”.

In another context, I’ve begun exploring the data ingestion capabilities of Spring XD. One of the key features of XD is its broad range of input sources - from HTTP, TCP, JMS, files, various databases etc to Twitter streams and Emails - all built on top of Spring Integration components.

To properly test how XD works under heavy load I needed a tool to provide more than just HTTP while being able to simulate thousands of requests per second on a developer laptop. I’ve used JMeter and Gatling to simulate loads in the past, but neither seems to be the perfect fit for this use case. Gatling is more or less HTTP only and I’ve sometimes felt the Scala-based DSL not really being my cup of tea. Extremely powerful, but not always easy to grasp or express myself in. It’s been a while, but the last time I used JMeter its underlying threading model limited the number of concurrent users, needing load agents to scale. And in all honesty, I’m not too fond of the JMeter GUI. Given that I’ve been reading up on and experimenting with Googles “Golang” programming language, I decided that brewing my very own load test tool in Go could be a fun exercise!

Things I would like but won’t do right now: 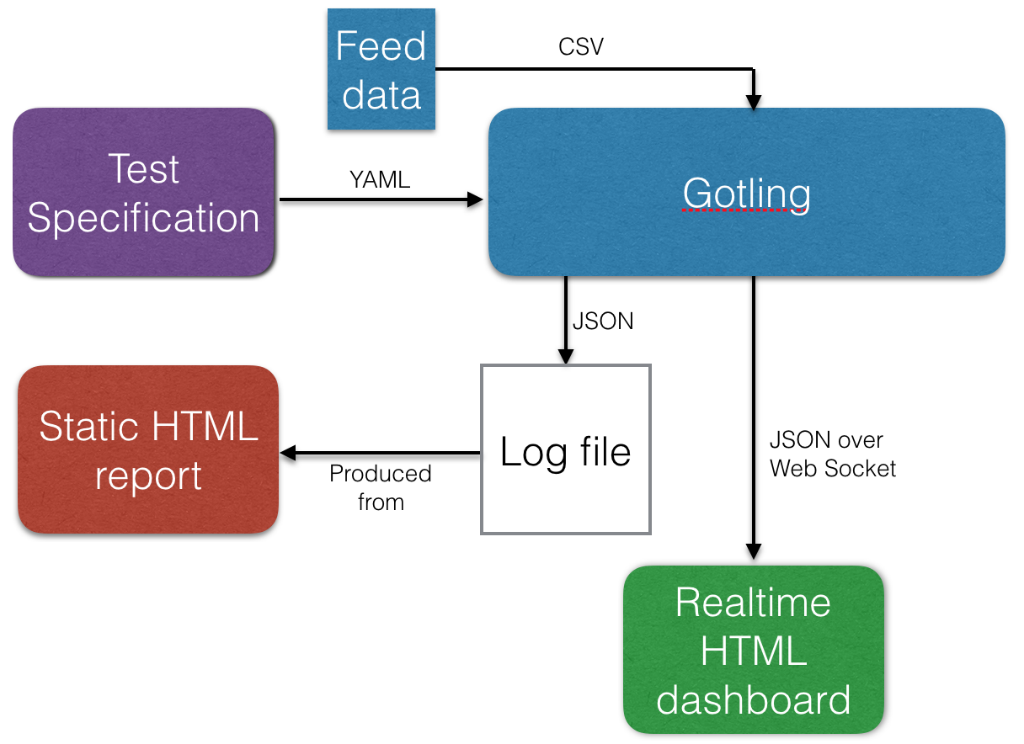 Not very complex - a simulation consists of a single YAML specification, an optional feeder and outputs results to a log and aggregated per second over a Web Socket. The (unfinished) HTML reports actually aggregates results, graphs etc. on the fly using Javascript on the client side with the raw JSON log file as input.

Why YAML? My primary objective was to have tests specified in a human-readable but structured way. XML, no thanks. JSON - not the right tool in this context IMHO. A new DSL? Too much work.

YAML offers readbility, structure and is also well-known with parsers and writers for most modern programming languages.

The test specification is made up of simulation metadata such as number of users, rampup time and number of iterations to run the actions list. A series of actions makes up the actual load test work performed by each user. Gotling currently supports three actions:

Let’s take a look at a sample test specification, each # is a comment about the feature on that line:

HTTP POST/PUT with bodies are also supported, including using variables from previous actions or feeders:

The body data above needs to be wrapped in single quotes as JSON is a valid subset of YAML and won’t be handled as pure string unless quoted. As seen, we’ve used a number of variables. They can be populated either from previous HTTP responses or a feeder.

There are some samples (here, here) in the github repository.

I have shamelessy “borrowed” the concept of feeders from Gatling. We can imagine the ${courseId} coming from a previous HTTP action, while the other values comes from a .csv file which could look like this:

E.g - title of the column in the csv files becomes the variable name.

Enough of the basics, let’s dive into Golang and why I think it was a really nice language to build all of this in: Goroutines and Channels.

Since Gotling mainly evolves about executing hundreds or thousands of virtual users without totally hogging all system resources, goroutines were an excellent match. The channel abstraction is mainly used for letting each virtual user (executed in a goroutine) report back results to a simulation-wide mechanism.

I’ve thrown together the sequence diagram below as an overview of the life of a Gotling simulation. It’s not 100% accurate and has a number of omitted participants for the sake of clarity. From a Golang perspective, all async invocations are functions called with the ‘go’ keyword making the specified function run concurrently in its own goroutine. The main async thresholds in the application are: 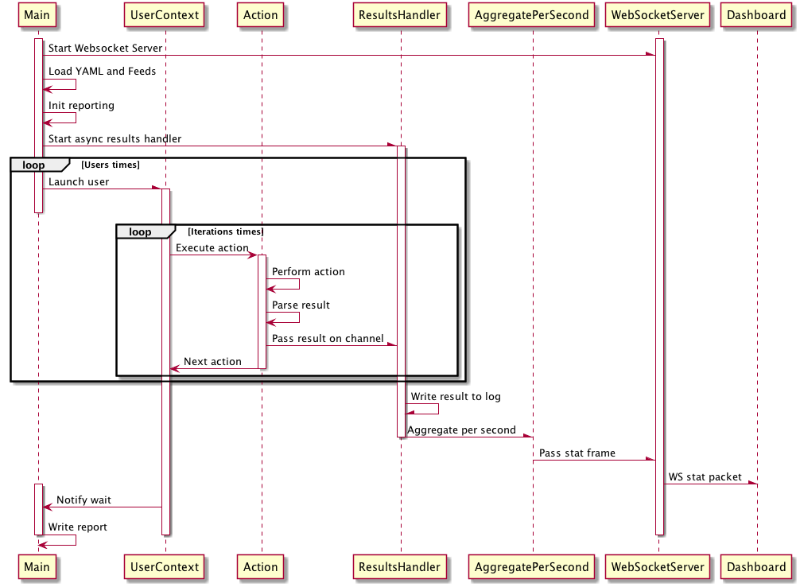 The snippet of code below showcases many core features of the Go language - the spawnUsers function runs on the main thread and launches “users” using the go keyword in a conccurent manner:

For further clarification, this is the launchActions function called as a goroutine. Note how it ends with wg.Done() which notifies the waitgroup that a previous wg.Add(1) has finished.

I kind of like the duck-typed implicit interfaces of Golang. Here’s the Action interface declaration:

And here is the HttpAction struct that implicitly implements the Action interface by the declaration of a matching Execute(..) method:

It’s possible to assert in runtime that a struct implicitly implements a given interface:

The above will yield an error if the assignment is not possible. Note the use of the underscore identifier - it’s used as a “ignore me” variable name in golang. Golang has the nice but sometimes annoying feature that unused variables or imports yields compile errors unless the assignment is to the underscore “blank” identifier. Noticed the multi-value returns often seen in the codebase? Example:

The first value in this example is a pointer to the Http response and the second is the error type. If you do not care about possible errors, the _ identifier can be used to ignore whatever the called function returns. Remember, in golang all declared identifiers must be used or ignored using the _ identifier, otherwise it won’t compile. This code won’t compile since the declared err isn’t used:

Results are HTTP-only this far, TCP/UDP results support will be added eventually. Anyway - we make heavy use of Golang Channels to pass the result of each HTTP invocation back to a global results aggregator. The code below is slighly simplified to keep it readble:

Taken from the code that builds, executes and assembles the request outcome, the snippet above showcases two cool Golang concepts - defers and passing a message to a channel. The defer is a bit like a Java finally that doesn’t need to be declared and that will be executed after the current method scope has been popped out from the call stack. The arrow operators <- and -> are used with channels to either denote passing a message to a channel (<-) or waiting for a message to be passed onto a channel. The receiving end of the message passed above looks like this:

During simulation startup, the acceptResults function was called as a goroutine:

E.g. the resultsChannel was created as a buffered channel with space for 10000 messages. The acceptResults function then declares another channel and launches a goroutine that we will pass results to for per-second aggregation that will eventually be passed in aggregated form to connected Web Sockets. The writeResult(&msg) function writes the result JSON to the log file. Note that we pass a reference (or to be more exact, a copy of a pointer) to the writeResult function and perSecondAggregator channels to avoid unecessary copying of the entire struct.

The for { } statement without conditionals is exactly what it looks like - an eternal loop. The select statement within is similar to a switch statement but used for working with channels. For each 100 microsecond iteration, the for loop will either accept a message if such is waiting in the case msg := <-resChannel statement or if no message exists in the channel at that point in time, the goroutine will sleep for the mentioned 100 microseconds.

Why sleep, why 100 microseconds? I suggest reading up on buffered vs unbuffered channels, but basically this offered a good balance between throughput (up to 10000 result messages per second) and CPU use. Using 10 micro second sleep or unbuffered (e.g. blocking) channels yielded excessive CPU use (context switching) or horrible throughput respectively.

Given that you have cloned the Gotling repository, have the Go SDK installed and a HTTP/TCP service to test, a Gotling simulation can be started from the command line:

A binary can be built as well:

With a compiled binary, it should be sufficient to use (Linux/OS X example):

The test will output some basic stats in the console window: 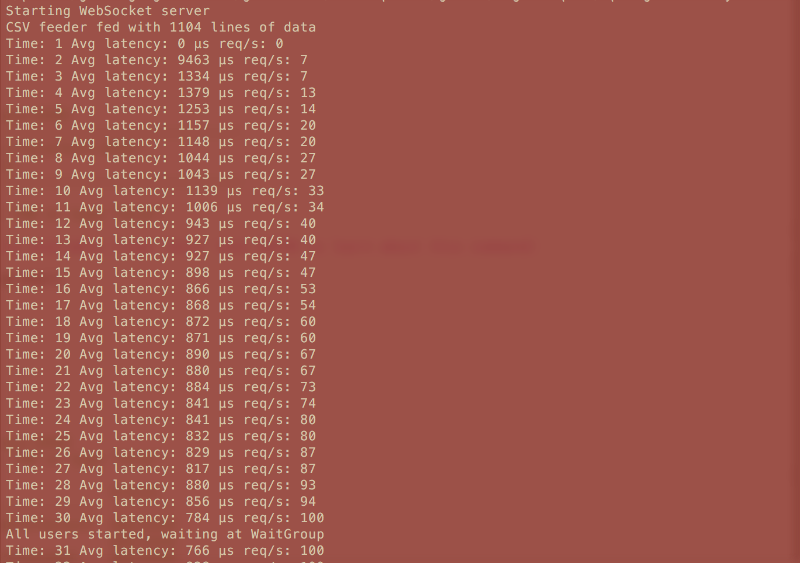 Note that the rampup time, in this case 30 seconds, evenly distributes user startup.

The “work-in-progress” live dashboard based on Web Sockets and Highcharts can be accessed using a HTML5-capable web browser by pointing it to: 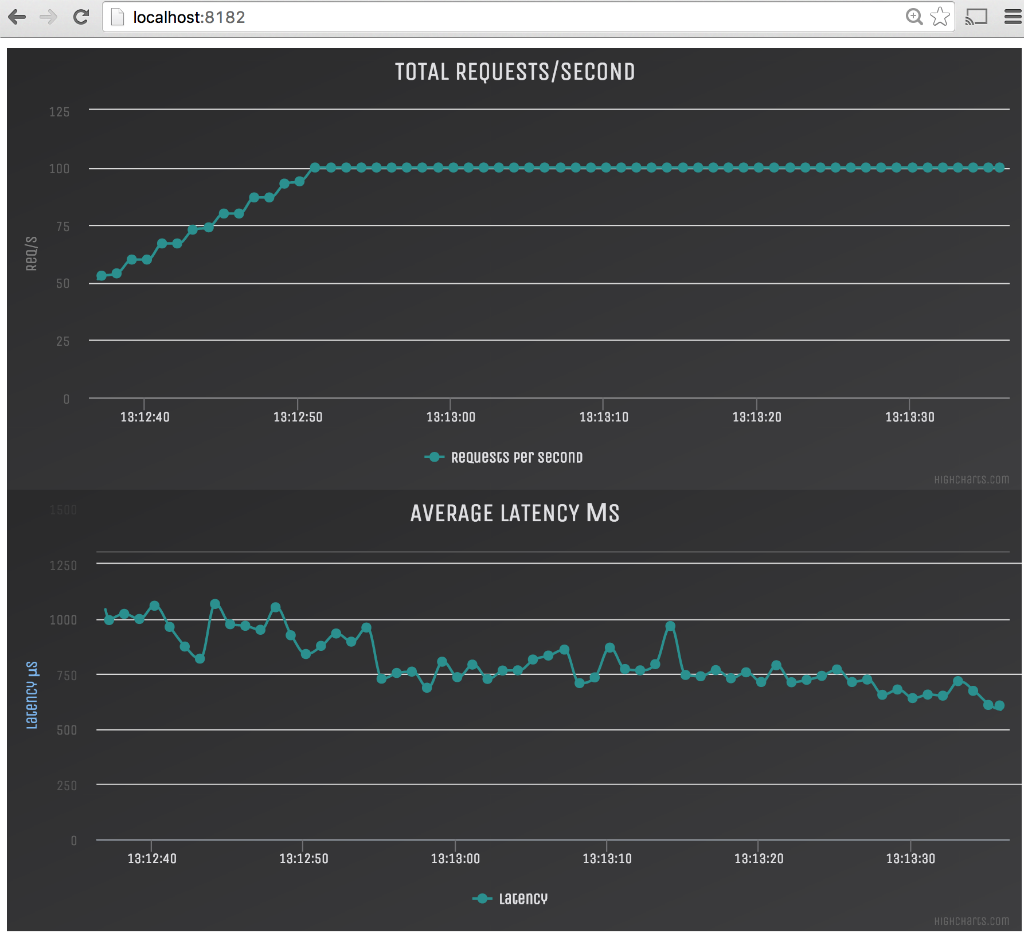 Technically, the simulation will launch a HTTP server on port 8182 that serves the static HTML/JS resources and also provides a Web Socket at http://localhost:8182/start

In the Golang program, each time a browser connects to the WS server the connection is added to a simple slice containing WS connections. The code that assembles the text frame sent over the Web Socket each second looks like this:

At time of writing this, the reports aren’t finished. A WIP sample: 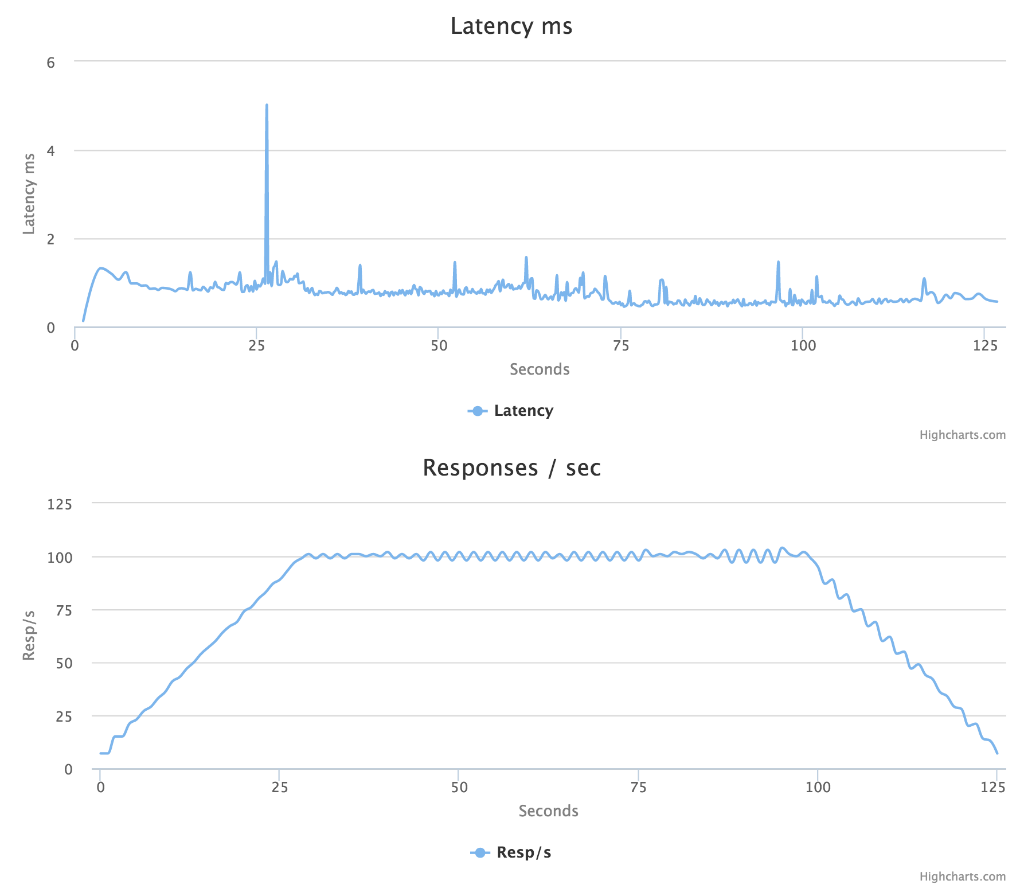 I decided to exercise a simple HTTP / JSON / MongoDB server I have previously written in Go using identical Gatling and Gotling load tests. I’d look at throughput, CPU utilization, memory use and stability. The test runs with 8000 concurrent users performing two HTTP GET with 3 seconds between each, e.g. ~2700 requests per second. The first GET returns a JSON listing of available objects and second GET fetches one of those objects using jsonPath variable extraction of a random id performed on the first response.

Both load test tools handles the amount of requests just fine, but going much higher on either makes the HTTP server crash with “out of files” even though I had bumped maxfiles to ‘unlimited’ on my MacBook Pro.

This is a rather unscientific comparison using the Activity Monitor on OS X 10.11, especially given my naive Go implementation. CPU usage seems to be quite even while the Go program uses less than 1/4th the memory compared to the JVM-based Gatling tool.

The Gotling tool is something I have written for fun and is essentially my first proper Golang program. It meets most of the basic requirements I set up for myself and I’ve had lots of fun writing both the program and this blog post. The codebase really needs some more love - use of packages, tests etc. are just two of many things that should be improved upon.

I hope you enjoyed reading about this endeavour. Please do not hesitate to use the comments.