In this part of the Go microservices blog series, we’ll take a look at using GraphQL for serving Account objects to our clients.

The finished source can be cloned from github:

This part of the blog series won’t introduce any new services, it will only add a new /graphql POST endpoint to the “accountservice” which will be wired to serve requests as defined by the graphql schema we’ll define in Go code.

GraphQL was developed internally by Facebook and was publicly released in 2015. It provides an alternative query language to RESTful and other architectures for serving data from a server to a client. It’s perhaps most unique feature is that GraphQL allows clients to define how the data requested shall be structured, rather than letting the server decide. This means that clients can fetch exactly the data required, mitigating the classic problems of fetching either too much or too little data for the use case at hand.

I recommend digging into the official documentation for more detailed explanations.

Let’s take a quick look at setting up a GraphQL schema using key concepts such as types, field, resolve functions, root queries and the resulting schema.

The schema defines what types and fields that can be selected in a GraphQL query. GraphQL isn’t tied to any particular DSL or programming language. Since this is a Go blog, I’ll use Go GraphQL schemas according to the graphql-go/graphql project on github.

Here’s the GraphQL type definition of the “AccountEvent” we introduced in part 13 of the blog series:

The type declaration above is about as simple as it gets with GraphQL, not that unlike a Go struct declaration.

However, it gets a bit more hairy when we introduce Resolver functions, arguments and link together several declared types into a composite object.

Here’s a somewhat simplified type declaration for our “Account” type that pretty much mirrors the output struct we’re currently using:

This first part is very similar to the “accountEventType” we’ve already declared, just “primitive” fields on a type, no big deal.

We’ll see the Resolve function for actual Account objects later when we look at a GraphQL queries. In that context, the Resolve function is the piece of code that actually fetches Account structs (or whatever) from some data source (BoltDB, Hard-coded, CockroachDB …) and stuffs that data into the GraphQL runtime that makes sure the outputted data conforms with the structure requested by the query.

The Resolve function below operates on already-fetched data (accounts) and performs filtering of each item’s “events” using the “eventName” argument if the query has specified such:

Resolve functions was the hardest part for me to get a grasp on, we’ll see a bit more Resolve code in just a little bit when looking at the Resolve function for the actual account query.

3.2 Putting the schema together

In order for a client to be able to fetch account objects, we need to create a schema consisting of a SchemaConfig with a RootQuery specifying queryable Fields.

This looks an awful lot like the stuff we’ve already declared, which is kind of the point.

My interpretation of what we’re actually seeing is that the declared “Account” field is a query on the RootQuery.

I’d say the final schema with fields and types could be represented like this: 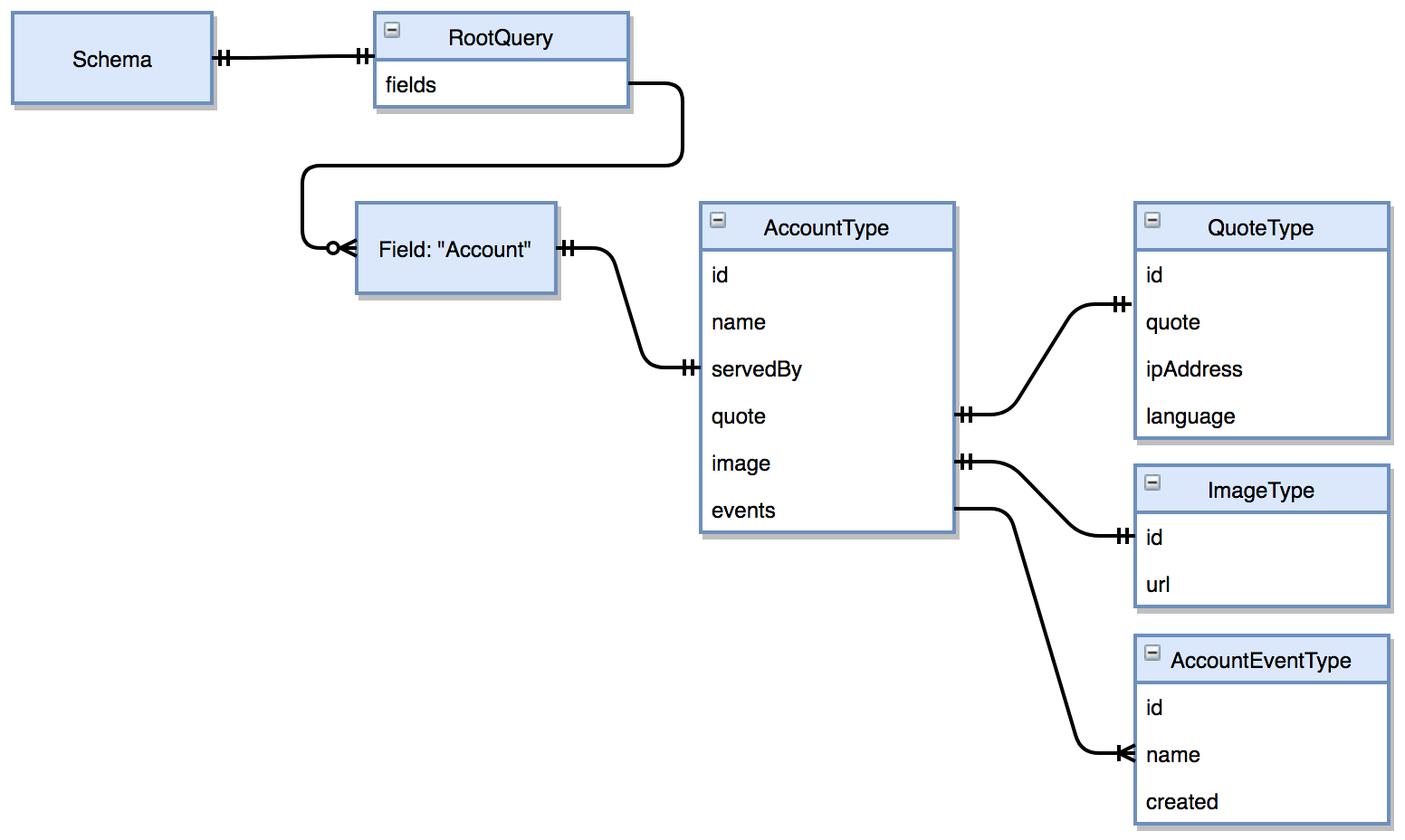 If we wanted a GraphQL query that returns a list of Accounts, another field could be declared such as:

That Field on the RootQuery specifies a List of accountType as its type. The single “name” argument could perhaps be implemented as a “like” search or similar in the specified “AllAccountsResolverFunc” function.

So, now that we have put our schema together, how do we actually tie our underlying data model to the Resolver functions declared in that “resolvers” parameter? (It’s passed as argument to the function setting up all this stuff)

The resolver implementation used is simply whatever the calling code supplies. In unit tests:

When started from the main func - i.e. either running standalone or when started within a Docker container), this line is invoked instead:

So far, we’ve only laid the groundwork. The purpose of GraphQL is after all facilitating those dynamic queries mentioned back in section #2 of this blog post.

GraphQL queries in their basic form simply asks for specific fields on objects declared in the schema. For example, if we want an Account object only containing the “name” and the events, the query would look like this:

Note that we must specify what fields we want on the events, otherwise the following error would be returned:

We’ll see a more complex example in the unit tests section below.

There’s tons of stuff one can do using GraphQL queries, read up on fragments, parameters, variables etc. here.

How do we assert that our schema is actually set up in a valid way and that our queries will work? Unit-tests to the rescue!

Let’s start by specifying a GraphQL query as a multi-line string. The query uses variables, field selection and argument passing to the quote and events sub-fields.

Next, the test function:

The structure of the test above makes it quite simple to write queries and test them against your schema. The actual output will of course vary depending on what test data your TestResolvers are using and how they are treating arguments passed to them.

All this GraphQL stuff is rather useless unless we can provide the functionality to consumers of our service. It’s time to wire the GraphQL functionality into our HTTP router!

Let’s take a look at /accountservice/service/routes.go where a new /graphql route has been declared:

Quite simple actually - the endpoint takes the query as POST body and the handler function is provided by a graphql-go/handler that accepts our schema (declared in accountql.go within the same package) as argument.

We just need to make sure initQL(..) is invoked someplace with our live resolver functions, for example in our router.go before initializing the routes:

(A note on copyall.sh: There’s just one change to our copyall.sh script this time around, which is that we’re back to using standard logging instead of our little “gelftail”. While using a Logging-as-a-Service is a must for production environment, it’s a bit inconvenient when developing. Since Docker added “docker service logs [servicename]” a while back, it’s now much easier seeing the logs without having to look up container id’s using docker ps . So, for now we’ll do our logging old-school.)

To test our GraphQL stuff in a runtime environment, start your Docker Swarm mode server, make sure you have branch P14 checked out from git and run the ./copyall.sh script to build and deploy.

As always, deployment take a little while, but once everything is up and running, our brand new http://accountservice:6767/graphql endpoint should be ready for action.

I’ve also exposed the /graphql endpoint in our Zuul EDGE server by adding an entry to the application.yaml. So we can call it through our reverse-proxy too including HTTPS termination:

Note that the ID used in the queries above is for an Account already present in my CockroachDB Accounts database.

To obtain an account id to query with, I’ve added a two helper GET endpoints to the “dataservice” exposed at port 7070. First, a little /random endpoint you can use to get hold of an Account instance, e.g:

If your database is empty (e.g. the above returns a HTTP 500), it should be possible to seed 100 accounts using another little utility endpoint /seed

Please note that running /seed removes all entries from your CockroachDB!!

A very useful trait of GraphQL is it’s capability to describe itself to clients using introspection.

By doing queries on __schema and __type, we can obtain info about the schema we declared. This query returns all types in the schema:

We can also take a closer look at the “Account” type, which after all is what we’re usually dealing with in this API:

There’s 3rd party GUIs that uses the introspection functionality to provide a GUI to explore and prototype queries, most notably graphiql.

One can install GraphiQL into the cluster or run a local client. I’m using graphiql-app that’s an Electron wrapper around Graphiql. To install on a Mac, use brew:

Point the URL at our API running inside the local Docker Swarm mode cluster and enjoy full code-completion etc for writing queries or looking at the schema: 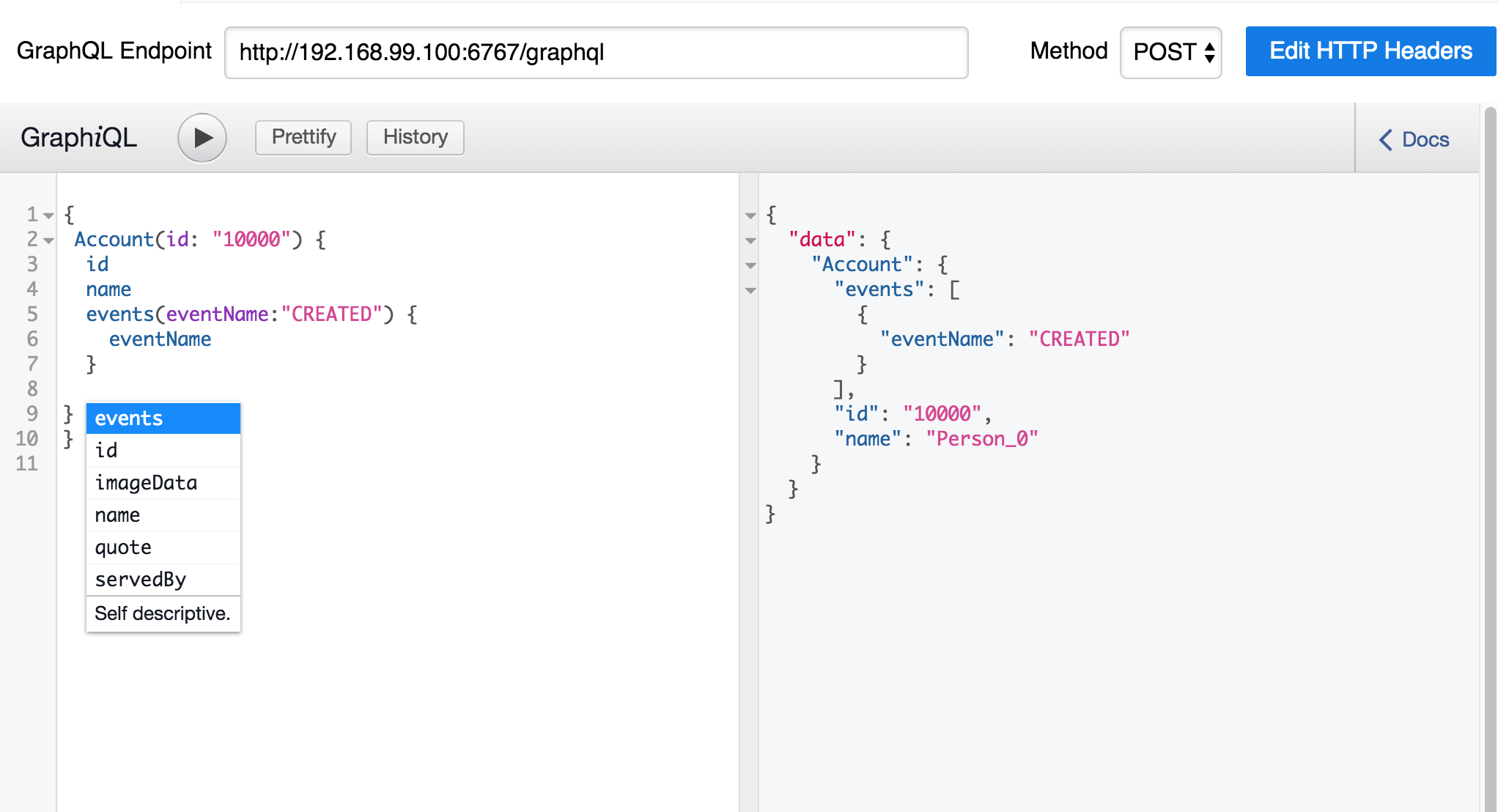 That’s about it! In this part, we added support for querying our account objects using GraphQL. While our usage is pretty basic, it should get you started using GraphQL with Go. There’s a lot more to explore when it comes to GraphQL, for further studies I recommend the official introduction as well as the wehavefaces.net.

In the next part, we’ll finally get to adding support for monitoring using Prometheus endpoints.